This was one of those reads I went into headfirst, knowing nothing about other than that I enjoyed the work of the creator, Aaron Alexovich. Finding this little graphic novel at the library, I saw that it was written and illustrated by him and that was enough for me, having previously enjoyed his other works like Serenity Rose and Confessions of a Blabbermouth.

Kimmie66 turned out to be a sort of science fiction mystery set in a 23rd century future where people spend more time living their virtual reality lives than their own physical ones. It’s a place where your very best friends might just be people you’ve never even met in real life, and who live lives you know nothing about. 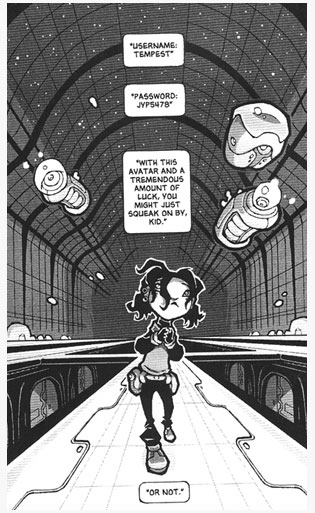 The story follows a teenage girl named Telly after she receives a suicide note from her best friend, the titular Kimmie66. But things get weird quickly as Kimmie66 continues showing up all over the various virtual reality “lairs” after her supposed death. Telly doesn’t know what’s going on at this point and is wondering if it’s all some sick prank or if she has an actual ghost story of sorts on her hands. Setting out to discover the truth, Telly gets help along the way from her slob of a brother, a mysterious hustler hacker, and her and Kimmie’s other loud-mouthed friend from their own VR lair.

Kimmie66 was a quick and entertaining read, and featured the spooky/cute black & white art that I’ve enjoyed in Alexovich’s other works. My only change I wish could be made would be for this story to be longer so it could have gotten into things a little deeper because it was all really interesting and left me wanting to know more about certain characters and whatnot. It was a good read though and makes me want to look into checking out more of Alexovich’s work again soon. 🙂