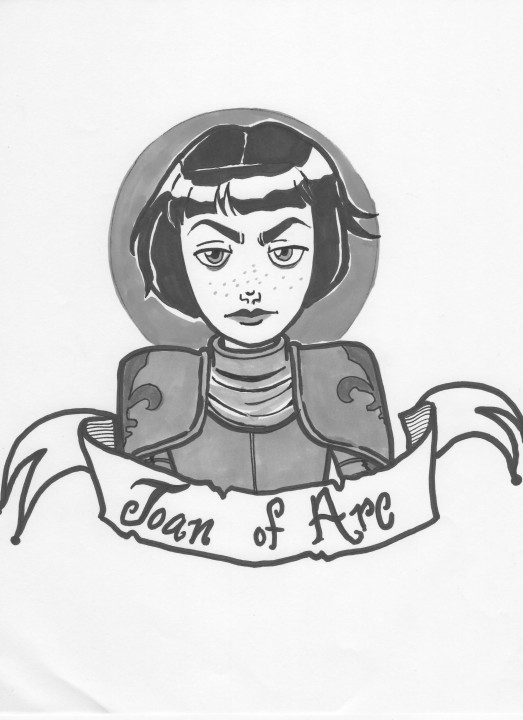 For my third entry for Cupcakes & Machetes’ Women’s History Month Blog Event I’ve decided to go with none other than Joan of Arc. (Be sure, if you haven’t already, to check out C&M’s posts here and here to see all the amazing posts about women people have been posting for the month!)

Joan of Arc is a woman who became many things despite her life ultimately being cut so short. She was born a French peasant, but would go on to become a military leader and a hero to her people. Sadly, she also ended up becoming a martyr. Eventually she would be deemed a saint and go down in history, her name and her legend living on for centuries.

Joan outlined military strategies for the French army against the English during the Hundred Years’ War, and directed troops in several victories, including breaking the siege the English had been holding over the city of Orléans for months. She became a hero to her country, and helped lead Charles VII of France to the crown.

Reputation has always been something of importance, and it was Joan’s very reputation in 1429, upon her victory at Orléans, that inspired what is known as the Bloodless March. This historic military campaign was one that stretched through English occupied territory from Gien to the Reims Cathedral (where Joan would witness the coronation of Charles VII). Along the way, Joan captured every English occupied city and fortress that barred the road, and she did it all without shedding a single drop of blood and relying only on her reputation.

Although she ultimately met a tragic end, being burned at the stake for multiple charges including witchcraft, heresy, and wearing men’s clothing, her strength and courage still lives on and inspires others to this day.

“All battles are first won or lost, in the mind.”

“The poor folk gladly came to me, for I did them no unkindness, but helped them as much as I could.”

17 thoughts on “Joan of Arc, The Maid of Orléans (Women’s History Month Post #3)”