Phew! It has been a busy week. Thankfully I was still able to squeeze in just enough drawing time to complete the first seven days of Inktober. 🙂 Some of the daily prompts were harder than others and some took a few tries to get the look I was going for, but it feels good to have stayed on track so far. I’ve been posting daily over on Instagram but I wanted to share a roundup of my first seven entries with you guys here on the blog. ❤

Day 1: The daily prompt was “RING” and I decided to go with the kind of rings you would see if you were to cut into a tree as my inspiration, rather than actual jewelry.

Day 2: The daily prompt was “MINDLESS” and I just decided to go with a cute little zombie dude. This one was a quick but doing the blood was fun. Day 3: The daily prompt was “BAIT” and I jumped at the opportunity to draw an angler fish because they’re badass and interesting, so why not?

Day 4: The daily prompt was “FREEZE” and I decided to draw a guy being pulled down beneath the ice by a skeleton woman. I wanted to go with muted color accents for the “freeze” prompt and I’m pretty happy with how they came out. 🙂 I wish I would have added some bubbles, but it’s never too late to go back in later and add them.

Day 5: The daily prompt was “BUILD” and I made a mad scientist building her own creation. This one was pretty fun since this mad scientist is a character I used to draw a long time ago and wanted to make a comic about.

Day 6: The daily prompt was “HUSKY” and I just drew a husky. Wasn’t really feeling this one, but I still got it done.

Day 7: The daily prompt was “ENCHANTED” and I had a lot more fun with this one, drawing a whimsical fairy moth lady. I also really enjoyed adding some brassy, silver and gold with my new metallic sharpies. This one was such a delight to draw that I’m sure I’ll be drawing her again at some point. I may even utilize her to jazz up the blog a little. 😉 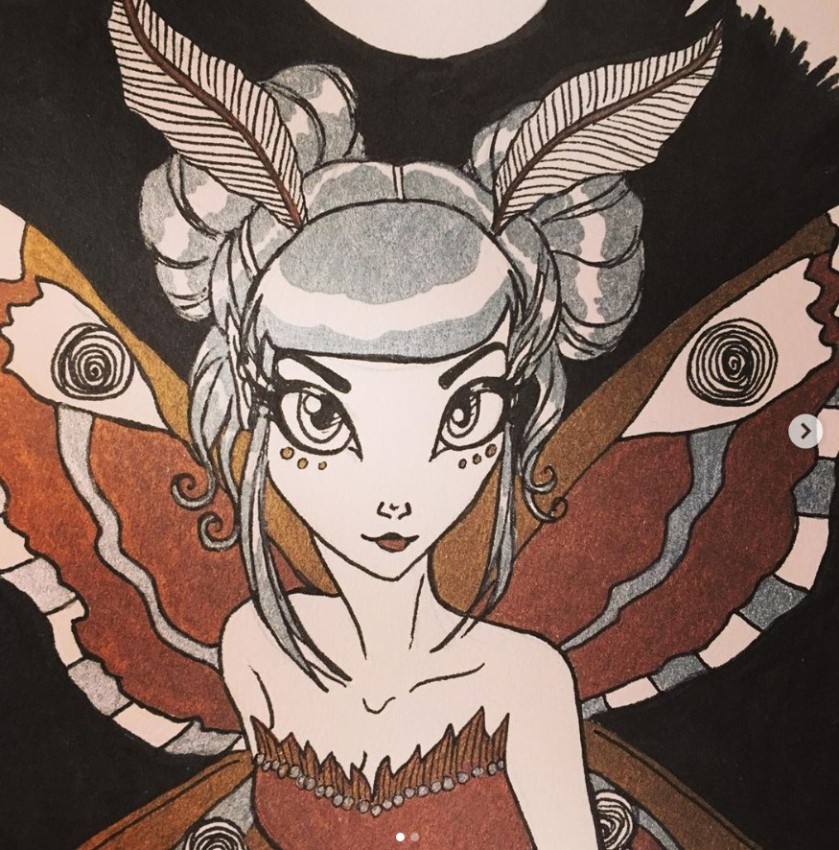 I hope you guys enjoyed the drawings and I look forward to sharing my next batch in a week. Are any of you participating in Inktober or doing any other fun challenges this month? 🙂