If you’re taking part in The Happiest Reading Challenge you know that June calls for reading “a book someone has recommend to you“. It didn’t take long to decide on what book I would read for this month’s part of the challenge. Like some of you guys, book and baked good blogger Cupcakes and Machetes has been throwing book upon book into my TBR mountain for quite some time. One of these books is The Lies of Locke Lamora (Book 1 of the Gentleman Bastard series), written by Scott Lynch. 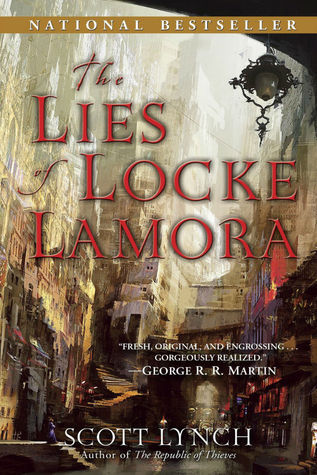 “An orphan’s life is harsh–and often short–in the mysterious island city of Camorr. But young Locke Lamora dodges death and slavery, becoming a thief under the tutelage of a gifted con artist. As leader of the band of light-fingered brothers known as the Gentleman Bastards, Locke is soon infamous, fooling even the underworld’s most feared ruler. But in the shadows lurks someone still more ambitious and deadly.

Faced with a bloody coup that threatens to destroy everyone and everything that holds meaning in his mercenary life, Locke vows to beat the enemy at his own brutal game–or die trying…”

Sounds pretty good to me! 😉

Epic fantasy is always a plus in my book. It also helps when it passes the C&M seal of approval. And by seal of approval, I mean she was willing to bare-knuckle fight anyone in a mud pit that had the audacity to say that Scott Lynch wasn’t a “fantastic fucking author.”

I’m really excited to finally read this one. 🙂 I hear it is a seriously amazing debut from Scott Lynch. It’ll be nice to get to experience it for myself after hearing so many good things.

So, how about you? Reading anything good right now, or taking part in any reading challenges of your own? I’d love to hear about it! It’s always nice to talk about good books. 🙂