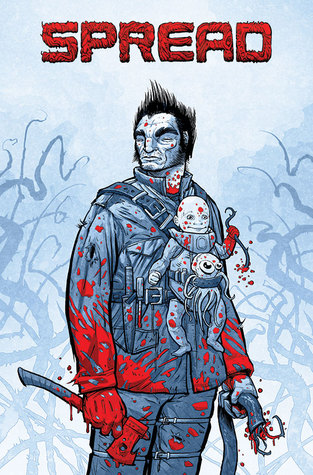 “Ten years ago, we dug too deep and unleashed something we couldn’t control. Something that twisted and warped every living thing in its path. Something that remade the world in its own image. The Spread. One man has found a child who could save the world, but he has to fight monsters, raiders, cannibals, religious fanatics, and one cranky baby to do it.”

Spread is an often over the top, yet entertaining post apocalyptic thrill ride. It’s like John Carpenter’s The Thing and Mad Max had a baby. The artwork is gritty, and most of the panels are practically dripping with blood and guts. I’ve gotta say, all the red does contrast quite nicely against the white frozen landscape the book takes place in. 😉

Characters include a silent loner named No who isn’t as good at being a loner as it would seem considering how he keeps accruing traveling companions, a baby who might just be the last shred of hope this bleak world has, an unhinged crazy lady with a heart of gold, and a big, burly cannibal.

Although I enjoyed reading the first volume of Spread (and plan on reading the other volumes) I could certainly see this comic not being for everybody. If you have an aversion to body horror, gore, and some good ol’ fashioned violence, obviously Spread just isn’t going to be your cup of tea.

I always have a hard time ranking things by the “5 Star Rating System”, buuuut I would give this introductory volume to Spread 3.5 out of 5 stars. It did a good job shoving readers straight into its dystopian world and left me intrigued enough to want to continue on with No and his motley crew of miscreants as they take on The Spread.

Well, those were my thoughts on volume 1 of Spread. What are you guys currently reading?? 🙂 Any horror stuff for the month of October you’re looking forward to?